I didn’t die, I swear!  I’ve just been in a little bit of a funk lately.  I’m not sure what it is exactly, eating makes me feel more full than normal and I’ve been completely worn out.  (no, I AM NOT pregnant.)  I decided Saturday that maybe I was just getting a little stir crazy from only going to work and home, so I went to JoAnn’s.  To my surprise, the store is moving and they were having a sale.  I’m talking almost everything is 50% off sale.  I knew I didn’t need any fabric right now, but I did know that I wanted some thread…and maybe some scissors.  WHO DOESN’T NEED A NEW PAIR OF SCISSORS, AM I RIGHT!?? 😀

I spent $58, so I saved almost as much as I spent. The only coupon I had was for 10% off the entire purchase. I feel like I made out like a bandit.

So there I was, just walking around, looking at thread…but then after I had a handful I decided yes, I did need a basket.  I got a lot…..A LOT of thread.  I’m just hoping that it pays out because I’ve gotten a great big spool of “fancy thread” before that wasn’t worth crap!  To it’s defense it could have been some sort of specialty thread and I was using it for a different purpose.  I also got a pin cushion that straps onto my wrist, which my  husband thought was funny and took hostage for a while.  I just happened to notice his wrist…and the little green and brown pillow that was strapped on it. 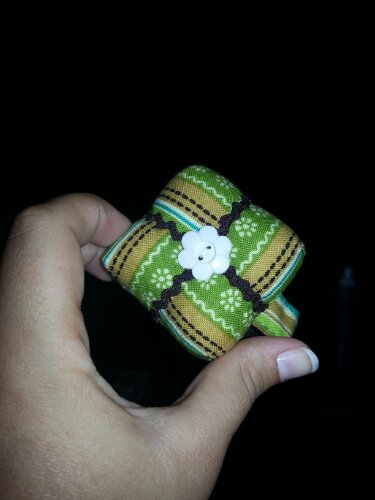 Husband: You could have just made one of these!

I also got a big embroidery hoop which, I’m hoping to use and rig my machine into doing some free motion quilting and/or embroidery.  I know, big hopes. 😀

helping with the decision process. “You don’t need to work on this one…”

I was hoping to rack up on some batting, but all that was left was by the yard, (there’s no way I was lugging that big roll over to the cutting table!) craft size and one or two crib sized.  Anyhow, all of that inspired me enough to go back into my sewing room at least for a little while.  I’ve made a few little coasters lately, hoping that would get me out of a funk, but it didn’t help much.  I decided to give the big brown quilt a break for a little while and go back to the chevron quilt.

I got another row sewn together and added to a corner.  I’m working with two separate corners right now, and there’s 3 rows left between them.  I’m feeling a little better today, and surely the gym will help out with this more, so hopefully I’ll get home and do some sewing, avoiding the lure of recorded tv.

Until next time!!  Happy sewing!

This means business! And it’s evidence I did some sewing 😀