I know I’ve probably mentioned this before, but I hail from Tuscaloosa, Alabama.  The land of Champions.  Home of the University of Alabama Crimson Tide.  Yes, that Tuscaloosa.  So I think it would go without saying that I am a huge Alabama fan.  I can’t help but to bleed crimson and white. (wait blood isn’t white!?  I should probably get that checked out) But…I did something unthinkable.  Something so awful….

I made this bag.

Yes, I know, okay?  I.  KNOW.  It’s so much orange.  Orange, being the color of enemies all around.  I mean look, Auburn, Florida, TENNESSEE…..all orange clad.  Living in Tennessee now I have to see this eye burning color all the time.  Plastered on cars with their little T’s in their windows, t-shirts, commercials, it’s everywhere.  It stings the eyes!

But…at least two of my bosses went to the University of Tennessee.  And one of them saw one of my bags, and asked if I would make a UT one for his wife.  At first, I thought “oh my GOD WHAT?!” but then he said he would pay extra since he knows I don’t like UT.  And that, ladies and gentlemen, is all it took.  I agreed, and within a weeks time I delivered the bag.

This story is far from over though, let me tell YOU!

I had to go get this fabric, because hello why in the world would I have all that orange in my sewing room?  I wouldn’t!  I have houndstooth and University of Alabama block prints and sailboats (okay they are not UA related…but they’re too cute not to mention) fabrics…just to name a few. 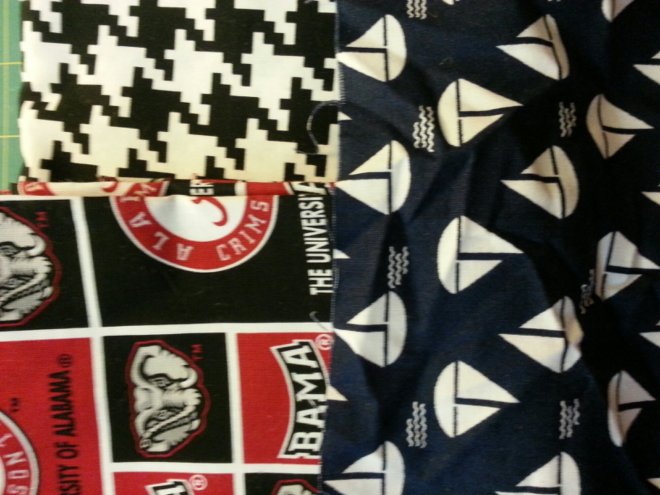 So there I am in Hobby Lobby, arms full of this…ORANGE….and I’m literally starting to sweat.  *Mind you, it’s barely been above freezing a couple of times for a few weeks now, I started to wonder what my body was even doing.*  Then this woman said to me “We were starting to wonder if they were out of UT fabric, then we saw your big orange stash!”

I quickly informed her that I don’t like UT…and this was for a specific project for someone else.

But that was only the beginning.

I got this all home, cut up and divvied up, and started to work.  While working on this bag my sewing machine grew angry at me.  I only wish that I were kidding.  There was this awful clunking sound, which I think I have fixed with a quick cleaning, but it still scares me…I broke a needle.  YES.  A practically brand new needle, too!  A seam didn’t hold through the wash and I had to go back and resew!  I had to sew one of the handles twice.  TWICE.  These handles are not very fun to mess with in the first place.  So to have to do them any more than you have to is maddening.  My batting for some reason, (which, by the way, had not done this on any of the previous bags I’ve made using this batting) decided to become as itchy as insulation!!!  It was okay after I washed it, but it, along with all the orange, was literally burning (or at least stinging) my hands.  Basically anything and everything that could have gone wrong here, did.  Is that the University of Alabama Gods (aka Nick Saban, haha!) looking down on me in disappointment?  Punishing me for making this bag?!  Well, as greedy as I am, I’m accepting my punishment because I got more for that bag that I normally charge.  My only fear is that more people will see that UT bag and want me to make more…*sigh*

I have decided that I need to make things right again in the world, and I ordered enough Alabama fabric for at least six bags.

Until next time, Happy sewing everyone!