I’m starting another long, drawn out, silly documentation of a project.

In the beginning of October 2018 one of my bosses at my day job (yea, multiple bosses, and day job, ugh [lol it’s not so bad]) tells me “hey you should go to the Ham Festival in Cadiz this weekend”

Okay so you may not know this about me, but in my love for all things animals, I think pigs may be my most favorite animal I’ve ever seen in person that isn’t my dog.  Something about their silly little snouts and they always look like they’re smiling yet they scream like they’re dying if you just disturb them a little bit…are they me?!  AM I A PIGGY?!  (sadly, no, I’m just a human)  I’ve actually wanted a pet pig for a very long time, but I don’t think I could provide a home for a piggy right now, so until I have some land that I could make a dedicated piggy space, no piggies for me.

When my boss mentioned the Ham Festival, he pulls up the website and I mean, it’s just a big festival in Cadiz, KY (just a couple hours from my house) that is just all things pig and cute piggy things.  There’s also a quilt show.  Being the quilting elitist (AKA trash quilter, only following patterns, never being creative! [lol])  I judged the quilts that were on the website.  Not ALWAYS harshly, sheesh, but I looked at them, and I was like yea, okay, civil war fabric everything, little kitschy country things, whatever.  I also noticed the ribbons that were on these quilts.  PIG RIBBONS.  And I knew right then and there that I needed to make a quilt that would earn a ribbon.

Being a pig themed festival (I just can’t get over it) I wanted to make a super pandering pig quilt.  I was so excited, I finally had the excuse I needed to make a pig quilt.  I had one pig block that I wanted to use, and I thought I needed a different pig, so I got another pig block.  I also recently got a really pretty ribbon letter block pattern that I thought I could use for a center of the quilt with a saying of some sort, which I decided to go with the phrase “Hamming it Up” which, apparently there are lots of pig and bacon sayings, but not as many ham sayings.

After playing around in Canva, I picked out a few pigs that could potentially be good representations of the pig blocks I would be using. 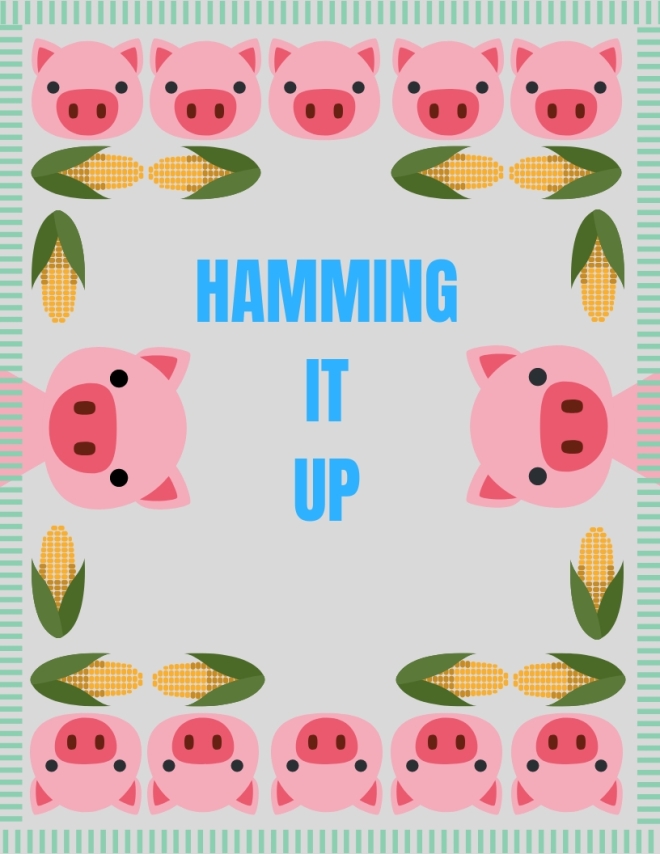 Yes, adorable, I know.  Who knew a trash quilter like me could be so creative.

I couldn’t decide on blue text or black text, but since the way the letters work is that they’re two colors, I’m going to do black text with blue “accents.”  (if you look at the blocks, you’ll know what I mean)  I think what I want to do is each part at a time, so letters, little pigs, corn, big pigs.  As far as quilting, backing, etc…well I haven’t gotten that far yet.  Maybe I’ll make the back look like bacon?  I don’t know!

Will the pandering work?!  Will I get a pig ribbon?!  I sure hope so.  I might just die.  Either way, this quilt is already so fun to me and I’ve only gathered patterns so far.  I’ll make update posts when I finish up a set of blocks, and I’m going to ultimately finish it up and post back if I actually do (or do not, you know, it’s very possible!) get a highly coveted pig ribbon.

Until next time, happy sewing!

One thought on “Hamming It Up Quilt”