Since I’ve been finishing quilts (because there’s a difference in making quilt tops and actually finishing them, you know, haha) I’ve been toying with the idea of entering them in quilt shows. I’ve been to several now, and I figured what would it hurt? So I decided a few years ago to enter a quilt in a show that wasn’t judged, just a show.

This was my moda love fancy star quilt. It was so much fun to make, and it’s living it’s best quilty life in Florida now. I entered it into the Robertson County quilt show in 2016.

So now that just putting quilts in shows wasn’t scary, how about entering a quilt to be judged? Well it’s only taken me 3 years later, but I’ve finally entered a different quilt into the fair. Actually, two quilts, and two fairs.

The first quilt is my Starburst quilt, named both for the pattern and for the candy because of the colors of the fabric. I loved that this quilt was finally finished, and everyone loves it so much so I decided to let it head to the county fair. Well wouldn’t you know, I was too sick to actually go to the fair, but when I went to pick it up, they let me know that I’d won first place in my division, as well as best in show!

The next quilt I entered I actually entered it before it was fully finished.

This is my Bad Girl Quilt I wrote about earlier this year, and I’d finished the top up going along with the quilt along that was going on this spring! I quilted the Dickens out of this, and it was SO much fun! There are curls and swirls and all kinds of fun. 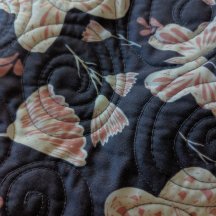 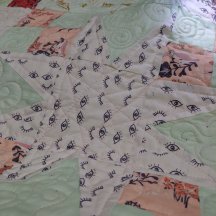 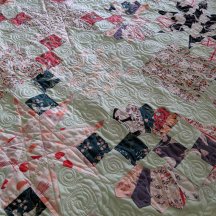 I won’t pick this up until the 16th, but I’m excited to see how it fairs with the other state fair quilts!

Have you ever entered a quilt in a show? If not, I think you should just do it! I dreamt I didn’t win anything and look how that turned out! Until next time, happy sewing!